Continuing my project through the arbitrary “Top 200(ish) Directors” list that I created, I thought it might be fun to take an extended (re)examination of one of my favorite living directors — a director whose work seems to frustrate and disappoint me nearly as often as it astonishes and entertains.  I’m talking about a director whose lasting contributions to both the horror and the science-fiction genres are undeniable:  Ridley Scott.

In my opinion, here are Ridley Scott’s best five films (from #1-#5, with some brief thoughts on each)…

Blade Runner (1982) – If you’re familiar with film, you likely knew that the #1 spot was going to be one of two films.  And yep…you’re right.  While Blade Runner isn’t my “favorite” Ridley Scott film (more on that in a bit), I do think it’s his “best” film and clearly a crowning achievement on a long, productive career.  While it wasn’t appreciated upon initial release, the film has grown in influence and is now recognized as it should be:  one of the most important science-fiction films of all time.  (Hell…I think it’s also one of the best noir films of all time.)  There are something like 8-9 versions of this film but, really, their differences boil down to (a.) Is there voiceover?, (b.) Is there a dream about a unicorn?, & (c.) Is there a happy ending?  I’d suggest picking up the “Director’s Cut” from the early 1990s, as that’s my personal favorite version.  Based on a Philip K. Dick story, it raises interesting questions about humanity and (self-)knowledge and features a great starring role from Harrison Ford, as well as strong supporting performances from Daryl Hannah, William Sanderson, Edward James Olmos, and Sean Young.  But to my mind Rutger Hauer — in arguably his career-best performance — is the true star here, as he’s utterly captivating in every scene.  If anything, let this just serve as a reminder that you should probably go back and watch Blade Runner every year.

Alien (1979) – Hey!  It’s my personal favorite Ridley Scott film and one that could arguably be in the #1 spot.  (I give that honor to Blade Runner, which is a more ambitious film, even if Alien is perhaps a more “successful” film in terms of pacing and editing.)  For me, Alien is one of the best 3-5 horror films of all time and, of course, started a now nearly 40-year-old franchise in the process — resulting in movies of widely varying quality.  But the original is still the king (or, more appropriately, the queen) of the franchise in my opinion.  Sigourney Weaver provides an iconic performance as Ripley, and the entire supporting cast (e.g. Tom Skerritt, Veronica Cartwright, John Hurt, Yaphet Kotto, and Harry Dean Stanton) are 100% perfect in their roles.  Of special note here is the supporting turn by Ian Holm as Ash, one of his best roles in a long career.  Oh, and Bolaji Badejo’s depiction of the eponymous Alien is still the most chilling, all these years later.  I can’t say enough good things about this film.

The Martian (2015) – After a decade of making sometimes mediocre, sometimes just-plain-bad films, Ridley Scott came back with a vengeance in 2015’s The Martian.  Based on Andy Weir’s book and an excellent script by Drew Goddard and featuring a number of truly great performances — notably from Matt Damon as stranded astronaut Mark Watney — this was both a critical and commercial success.  One of the most underrated aspects of this film is the juggling that has to happen (on the part of the director, the editor, etc.) to successfully mesh together a large ensemble cast, various storylines in different cities and countries, even multiple planets in this case.  This could easily have been a confusing, disorganized mess; however, it comes together perfectly to produce a captivating, memorable, and highly re-watchable film.  Oh, and it happens to be (mostly) scientifically accurate as well, so bonus points for that.  Smart people using their smarts together to solve big problems! 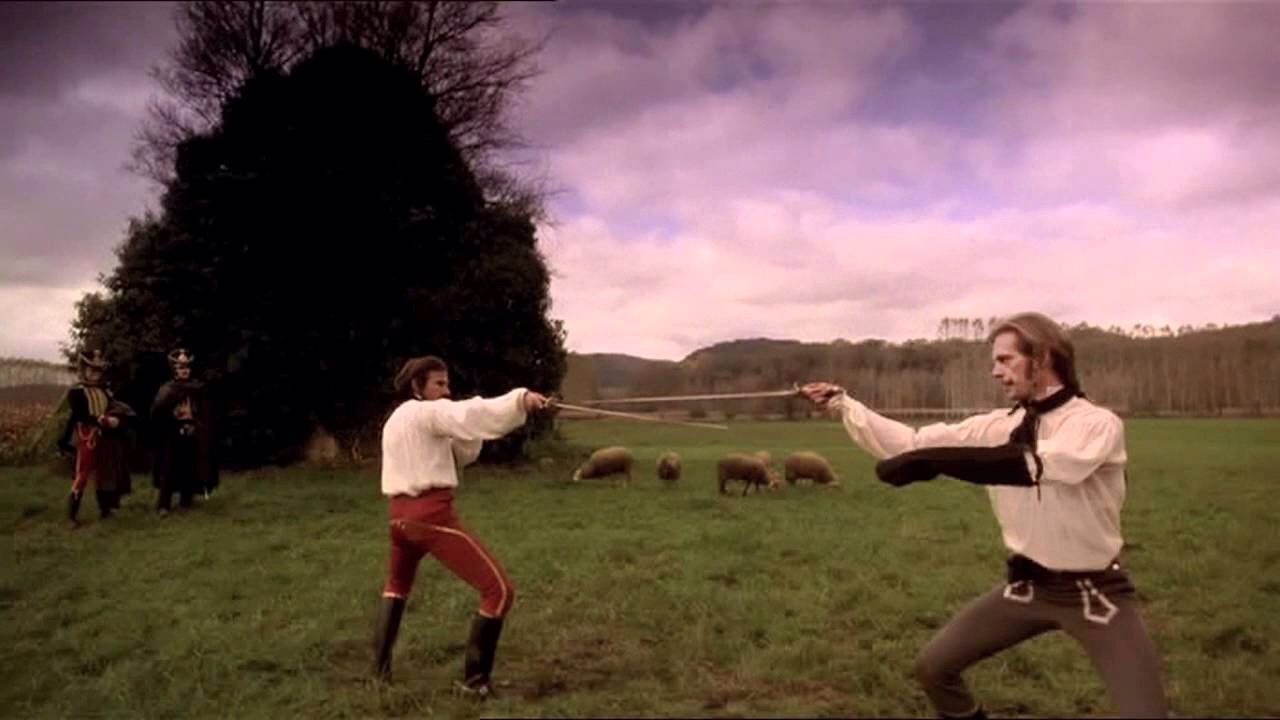 The Duelists (1977) – Now we get the the film that I’m most excited to push you toward watching:  Ridley Scott’s debut feature-film, The Duellists.  Even though I think the movies already mentioned (Blade Runner, Alien, & The Martian) are better films, it amazes me that this film doesn’t have a broader audience among casual viewers and cinephiles alike.  Based on a Joseph Conrad story (which was, in turn, based on a real-life series of events), this film explores the antagonistic personal relationship between two men (played with great aplomb by Keith Carradine & Harvey Keitel) of the same rank in the same army who, nonetheless, are stupidly drawn into a series of seemingly never-ending fights.  More specifically, in this film, the two men duel six times over the course of thirty years — with swords, with pistols, on horseback, etc. etc.  (Amazingly, this plot actually pales to the true version, in which the two men allegedly engaged in 30 duels with one another over the course of 19 years!)  The movie manages to be darkly comic, and it also establishes an undeniable sense of dread and eventuality — i.e. you know that another duel is bound to happen but don’t know when.  It’s wildly entertaining and thought-provoking about the notions of masculinity, honor, anger, reputation, duty, etc.  And, as it was visually inspired by Stanley Kubrick’s Barry Lyndon, which was itself inspired by various paintings, it’s absolutely stunning in terms of the visual composition.  Go find and watch this film!!!

Black Hawk Down (2001) – Based on a true account of a disastrous mission in Somalia during the early 1990s, this film isn’t a “masterpiece” like the other films on this top-five list.  However, Scott deftly balances some incredibly intense action sequences with moments of quiet dread and claustrophobia, as these soldiers are surrounded by opposing forces and cut off from help.  Like The Martian, Black Hawk Down features a very large cast and multiple storylines that occur simultaneously but at different locations inside-and-outside the main setting.  However, it’s not quite as streamlined and as effective in balancing those stories — perhaps because all of the characters are men and all are dressed in the same (or similar) uniforms, which can make it difficult at times to identify certain characters.  That said, once you’ve watched the film and know the basic plot, this is a film that gets better with multiple viewings as it becomes easier to identify the various characters and the various groups at work in the various missions.  If it’s been awhile since you watched this one or if you found it too confusing the first time around, give it another try.

Strictly speaking, in terms of broad viewership (though it’s critically admired), I’d argue that The Duellists is Scott’s most under-appreciated film; however, I’ve already talked about that film above.  Depending on who you talk to and whether they’ve seen the “Theatrical Cut” or the “Director’s Cut,” you might hear some argue for Kingdom of Heaven here.  Personally, I think that 1492: Conquest of Paradise and A Good Year are both better than their abysmal critic ratings on Rotten Tomatoes would otherwise suggest — the former film is certainly overbloated but it’s filmed very well, while the latter is a noticeable genre departure for Scott and reminiscent of rom-coms of yesteryear.  But for my pick here, I’m going to go with Matchstick Men (2003).  While it’s appreciated by critics, it’s frequently omitted by casual viewers from discussions of Scott’s best work, although it certainly deserves to be in the conversation.  Nicolas Cage turns in a great performance (one of the most underrated of his career) as a grifter with severe obsessive-compulsive disorder and various phobias, while Sam Rockwell and Alison Lohman provide excellent support.  It’s an atypical focus for a Ridley Scott film but worth watching.

As mentioned at the start, while Ridley Scott is a director whose work I greatly admire, he’s not immune to “bad” films and, in fact, there are several films in his oeuvre that I would say are less-than-successful (to put it nicely).  Depending on who you talk to, Prometheus might appear on this list — although I think there’s something to admire in that film’s visuals and its attempts at something unique and grand, even if it doesn’t succeed.  Robin Hood is a largely boring affair, as is Exodus: Gods and Kings, while Hannibal ramps up the gore and disgust at the expense of being actually frightening.  But my pick here is The Counselor (2013).  Now…I don’t think this is his “worst” film.  (That “honor” would go to White Squall — a passable but, largely, boiler-plate survival story based on a true story.)  However, The Counselor — with its experienced director (Scott), its phenomenal writer (Cormac McCarthy), and its excellent cast (e.g. Michael Fassbinder, Javier Bardem, Brad Pitt, Penelope Cruz, etc.) — is immensely disappointing and, aside from “the bolo” (which I won’t spoil for you here), is a ponderous and forgettable effort from everyone involved.

If you’re not familiar with Ridley Scott’s work (which seems unlikely, given the breadth of his career) or if you’re just looking for a good way to jump into a deliberate (re)viewing of his filmography, then I might suggest starting with one of his most recent films, The Martian (2015).  Here, we get the best of Scott in terms of the science-elements, excellent visuals, a grand scope, etc. etc.  Moreover, it’s a much more immediately accessible film than something like Blade Runner and has more emotional variance than something like Alien, which makes it a good place start for Scott newbies.

It’s interesting to think of Ridley Scott in the context of my previous retrospective (on Ron Howard’s directorial work).  Whereas Scott isn’t as consistent as Howard, while Scott’s lows are much lower, it’s also true that the highs of his filmic oeuvre are much, much higher.  To my mind, Scott’s career thus far has produced four genuine “masterpieces” — films that I think are worthy of preservation and remembrance:  Blade Runner, Alien, The Martian, and The Duellists.  If Scott had only created Blade Runner (for instance), his career would have to be regarded as a success.  If Scott had only created Alien, he would be one of the most influential directors of all time.  But the fact that three of those aforementioned masterpieces are the first three films of his directorial career is utterly astounding.