This week, as part of my ongoing project, I’m looking at a couple of contemporary directors who have a very striking, dream-like (sometimes nightmarish) visual aesthetic resulting in films that are instantly recognizable for viewers — albeit in different ways and toward different effect.  First up, we have director Tim Burton, whose work inspires a bit of childhood nostalgia for me.  (We’ll look at the other director I’m pairing with Burton later this week in a different post.)

To the best of my knowledge, I’ve seen all 18 of Tim Burton’s feature-length films so far.

Below are my picks for the best five films by Tim Burton (from #1-#5, with a few thoughts on each film)… 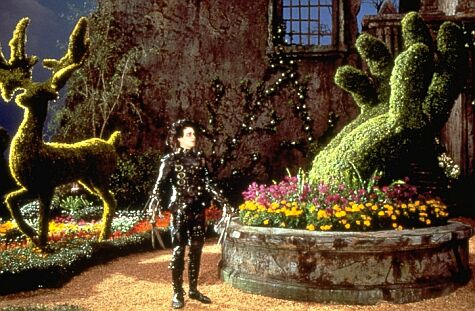 Edward Scissorhands (1990) – When I think of a “Tim Burton film,” this is the movie that immediately jumps to mind.  After all, it features Burton’s trademark visual style that alternates between presence and absence — i.e. bright (almost grotesquely bright) colors juxtaposed with white snow and black leather.  While there is a discernible 1950s influence in the form of suburbia and American capitalistic society, there is also a noticeable Gothic element with an abandoned castle on the outskirts of town, a mysterious stranger, a scientist playing in the realm of gods, and so on.  (This Frankenstein-like premise — updated and tilted askew — is something that can be seen in several of Burton’s works.  It’s obvious from his tendency to mish-mash registers that he’s heavily influenced by the Eisenhower era — particularly it’s interest in science-fiction and B-movie sensibilities — and the horror tropes of Gothic Romanticism.)  Anyway…Edward Scissorhands is, to me, the most complete and thorough execution of Burton’s aesthetic, and it’s anchored by strong performances from Johnny Depp, Winona Ryder, Dianne Wiest (an underrated phenomenal job from her here), Alan Arkin, Kathy Baker, and Anthony Michael Hall.  And horror icon Vincent Price appears as well — what more could you ask for? 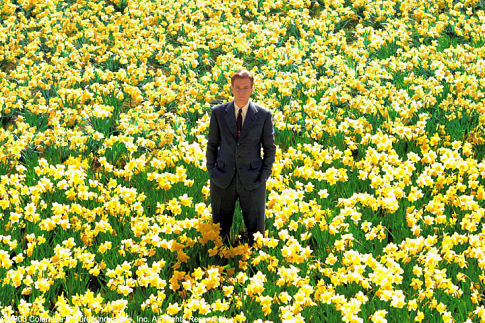 Big Fish (2003) – This is probably my most “controversial” of the Burton top-five picks.  It seems that most of the people that I’ve talked to about Big Fish didn’t enjoy it.  Some, in fact, hated it and the critical reviews were mostly mixed.  While it’s certainly sentimental, it’s also the most immediately re-watchable of Burton’s movies and is his most successful example of mainstreaming a film while retaining his artistic peculiarities.  In terms of the plot, Big Fish is a pretty standard premise — i.e. a tumultuous father-son relationship.  But that relationship is complicated through meta-narrative concerns and ars poetica interests.  (It’s essentially a story about telling stories — a genre of film that often appeals to me when done well.)  Moreover, as the film progresses, Big Fish contains several intriguing palinode-like moments of contradiction or recantation, where characters must consider the benefits and the pitfalls of “narrative” in the real world.  Anchored by Ewan McGregor and Albert Finney playing the same character at different times (and, in the process, turning in two of the best performances of their respective careers), the film features strong performances from a talented cast — including Jessica Lange, Billy Crudup, Marion Cotillard, Helena Bonham Carter, Alison Lohman, Steve Buscemi, Danny DeVito, and Loudon Wainwright.  If this film had been made during a different era of cinema, I think it would be widely regarded as a “classic.”  Highly recommended. 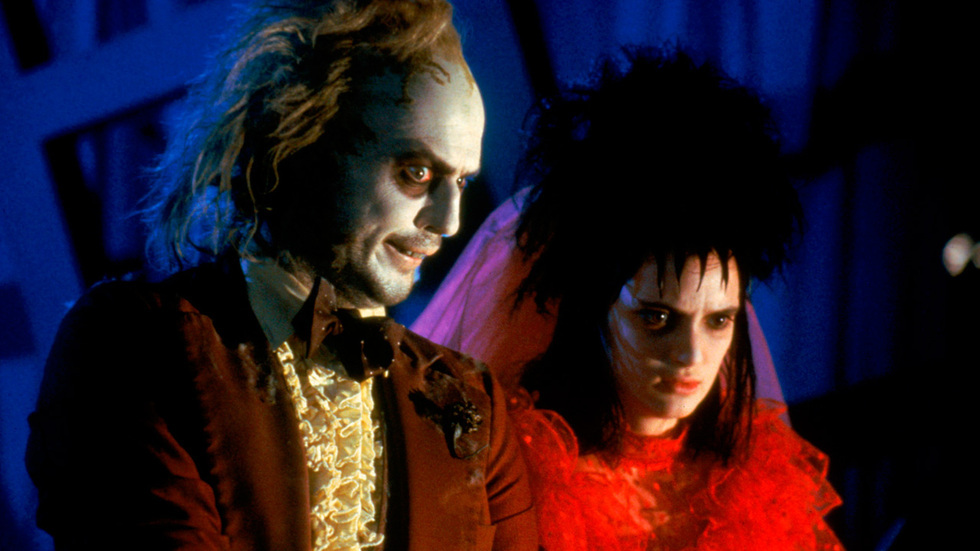 Beetlejuice (1988) – Something of a nostalgia pick here but one that still holds up well many years later.  By that, I mean that it likely remains as weird and, at times, as grossly uncomfortable for audiences today as it did then.  Again, you can notice Burton’s interest in classic horror stories here — e.g. ghosts, demons, seances, underworlds, etc. etc.  (In fact, Beetlejuice was originally planned to be much more of a horror film before the script revisions transformed it into a comedy with some horror elements.)  Michael Keaton gives one of the strangest performances of his career as Beetlejuice or Betelguise (it’s complicated) — a sort of entity-for-hire with questionable motivations and tactics but undeniable results.  Alec Baldwin and Geena Davis are very likable as a recently deceased couple who feel somewhat ambivalent about new people moving into their home and making some truly (hilariously) awful architectural and decorative renovations.  Winona Ryder is solid here in a very early role as our main protagonist, and both Catherine O’Hara and Jeffrey Jones walk a very fine line in terms of characterization — they aren’t necessarily terrible people despite being pretty terrible parents.  (O’Hara, especially, is wonderful in this film and steals pretty much every scene that she’s in.)  Is this a cult-classic or just a classic-classic?  I can’t decide, but it doesn’t matter — it’s worth (re)watching.

Batman (1989) – For me, Michael Keaton is Batman.  I can appreciate Adam West’s camp, Christian Bale’s fierce commitment (even if he lamentably gave us “the Batman voice”), Ben Affleck’s physicality, and Will Arnett’s comic demeanor in this role.  [I’m not going to mention the other Batmen because…well, that should be obvious.]  These actors all brought something interesting to the role.  But, as a child of the late 1980s / early 1990s, Michael Keaton is the one true Batman.  And Jack Nicholson relishes his role as the Joker — although his clown prince of crime doesn’t quite carry the same degree of menace and doesn’t feel like the “threat” of Heath Ledger’s later interpretation of the character.  In some ways, Burton’s aesthetic feels right for a “comic book movie” — with its blend of camp and color and violence and danger — and it works well here, balancing on a tightrope between feeling like a classic comic story (i.e. Golden Age & Silver Age) and feeling like something slightly more contemporary.  Closer to James Gunn’s and Sam Raimi’s vision for a “comic book movie” than Christopher Nolan’s and Zack Snyder’s, Tim Burton’s Batman is instantly accessible and a film that has broader appeal than some of those other directors’ efforts.

Pee-wee’s Big Adventure (1985) – It’s difficult to watch Pee-wee’s Big Adventure today with the same mindset that one might’ve had in the mid-1980s.  Today, the character has become somewhat normalized and accepted by popular culture — even the monolithic Netflix has produced a Pee-wee special.  In some ways, Pee-wee is now as American as apple pie.  He is something of an institution.  (OK…maybe he’s more like quince pie but he’s apple-like.)  As a result, I don’t know if audiences today — myself included — can really appreciate just how strange and peculiar and counter-cultural Pee-wee Herman must’ve been for those living in the Reagan era.  Still…with its twist on the classic “quest” narrative and its off-beat protagonist, there remains something undeniably (engrossingly) bizarre about Pee-wee’s Big Adventure.  A great performance by Paul Reubens and one of the all-time despicable heel turns from Mark Holton — as well as seminal scenes involving a barroom dance, a hitchhiker’s tale, and a bike chase — fill out this gem, which also happens to be Burton’s first foray into feature-length films.  Oh…and bonus points for this being composer Danny Elfman’s first orchestral composition for a movie.

I’ve already mentioned Big Fish, which I think is incredibly underrated critically.  (There’s no world — real or imagined — in which that lovely film ought to be rated lower than Burton’s Sweeney Todd and Charlie and the Chocolate Factory and, yet, that is the world in which we find ourselves.)  Here’s an endorsement:  Against all my better judgment, I didn’t actually hate Dark Shadows (2012) — a stupid film but one where, if the expectations are low enough, you might be perversely amused from time to time.  Ed Wood (1994) is underrated casually, although not critically.  But for my pick, I think I’ll go with Sleepy Hollow (1999).  Aside from a few characters’ names, there’s VERY little in keeping with Washington Irving’s influential short story.  But if you’re watching this movie, you’re watching it because of the Headless Horseman, and this movie doesn’t disappoint on that front.  Christopher Walken oozes menace and general creepiness in the role, Johnny Depp delivers a good performance as the brilliant (but bumbling) Ichabod Crane, and Burton excellently balances violent violence (huh?) with comical violence to create something that’s alternatingly horrifying, disgusting, and funny.  Plus, Sleepy Hollow features some nice supporting performances by actors like Christina Ricci, Michael Gambon, Miranda Richardson, Richard Griffiths, Christopher Lee, and, most surprisingly, Casper Van Dien.  Overall, this movie is better than one might expect.

There are a few contenders here.  Charlie and the Chocolate Factory (2005) makes the mistake of psychoanalyzing Willy Wonka’s childhood traumas and is, more importantly, just a completely unnecessary film — since the classic version still holds up nearly 50 years later.  Sweeney Todd (2010) becomes increasingly boring as it progresses — a seemingly impossible task given the premise of the story.  Mars Attacks! (1996) didn’t really do it for to me, although that film does have its fans.  I think Batman Returns (1992) loses some of its luster after multiple viewings.  Etc. etc.  But for me, there’s absolutely no reason to watch Planet of the Apes (2001).  [Actually…I take that back slightly.  Tim Roth gives a pretty fun performance as the warmongering Thade, but…that’s about it.]  Burton’s remake of the 1968 classic is, allegedly, more faithful to the source material, especially with its ending.  However, Mark Wahlberg’s performance can’t hold a candle to Charlton Heston’s iconic, over-the-top, angst-ridden original.  It’s clear from the other films in his oeuvre that Burton has a love for these B-movie premises and their tics/tropes; but this effort fails to be quite B-movie enough and ends up being remarkably dull.

Certainly, Burton’s aesthetic — bizarre, silly, violent, ominous, darkly colorful, etc. — isn’t for everyone.  I’ve known plenty of people whose cinematic opinions I trust who simply cannot get into this director’s work.  Having seen all Burton’s films thus far, I do think it depends on the viewer’s personal preferences — whether he/she would prefer something relatively “mainstream” or not as a starting point.  I suppose that, if I were to make a recommendation regarding where to start for someone interested in (re)trying Burton’s filmography but also someone who might be hesitant about some of the more fantastical qualities and the quirky brand of humor, I would probably suggest that you start with something like Big Fish (2003).  While Big Fish certainly contains Burton’s humor and dream-like visuals, it’s also more “restrained” and less off-beat than some of his other works (e.g. Pee-wee, Beetlejuice, Edward Scissorhands, etc.).  Another option in this category would be something like Big Eyes (2014).  Or, if you’re the kind that enjoyed Harry Potter, maybe try Miss Peregrine’s Home for Peculiar Children (2016), which incorporates some of Burton’s visuals but in a magical context that might make more sense for some viewers.  And from there, you can ease yourself into some of the weirder films.  But, again, it all depends on where you’re at and what you prefer.

Fifty years from now, it’ll be interesting to see how cinematic history remembers the work of Tim Burton.  Certainly, there are few directors who can claim to have had such an impressive and uniquely memorable start to a filmmaking career, as his first 5-6 films are genuinely great movies that scream “auteur.”  That said, starting in the mid-1990s, with the notable exception of a couple films, Burton had a long streak (of about 20 years) where most of his films were bad or simply mediocre.  Perhaps he’s regained some of that magic, however, as his last few films have been surprisingly enjoyable and have (hopefully) demonstrated a return to excellence.  Regardless, I think that one can watch the best of Burton (I’d argue that there are 5-6 great Burton films and another 5-6 good Burton films that are worth watching at least once) and can appreciate the way in which he marries disparate elements of horror/comedy into something that’s instantly recognizable visually and tonally.