As stated in my last retrospective installment, I’m spending the next several weeks looking specifically at the work of women filmmakers — particularly those with fewer than 10 films (as that’s the threshold for my typical director retrospectives).  Last time, I took a look at arguably the most critically acclaimed woman director working today (Jane Campion), and I thought I’d continue that trend by looking at another director who has generally been well-received by critics — although her most recent efforts have been a bit mixed in terms of reception — and a director with a family connection to the business:  Sofia Coppola.

For this post, I watched all 6 of Coppola’s feature-length films.  [I also watched her Netflix Christmas special, A Very Murray Christmas, though I didn’t include it here since it’s only about an hour long.]  I’ve ranked each of Coppola’s films below from worst-to-first in my mind with a few brief comments on each… 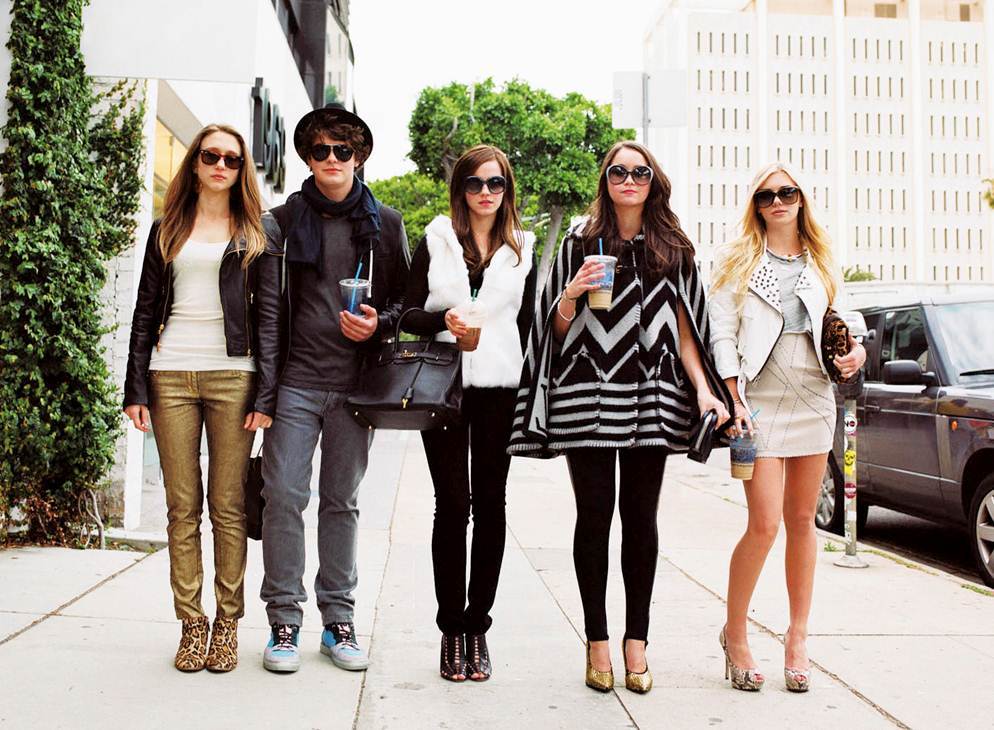 #6: The Bling Ring (2013) – The “honor” of worst Sofia Coppola film easily goes to her 2013 effort, The Bling Ring.  Based on true events about a group of teenagers robbing the Hollywood rich-and-famous, the film suffers from the fact that absolutely none of its characters are likable or, even more important, interesting.  Teenagers are, by and large, some of the least interesting people on earth; and this is even more true when those teenagers are well-to-do, wannabe “lifestyle” artists or architects or whatever the fuck they call themselves (more brand than being).  This film should serve as a warning for any writer/director:  If you’re going to create a work about highly flawed, unlikable, and/or anti-heroic (or just plain villainous) people, at least make them compelling or make the telling memorable or…something.  [I’m sure that there’s probably a satirical aim here, but if so, it lands with a thud — lacking the ferocity of some satires and the humor of others.]  But perhaps the worst aspect is that The Bling Ring lacks the visual craft of (most of) Coppola’s other work.  Just a bad movie that is, frankly, unwatchable.

#5: The Beguiled (2017) – Coppola’s most recent feature-length film, The Beguiled is based on the Thomas P. Cullinan novel of the same name.  [There’s also an earlier film-version from the 1970s directed by Don Siegel and starring Clint Eastwood in one of his first non-Western major roles, but I’ve not seen that version.]  Set during the American Civil War and exploring gender (and sexual) dynamics when a mostly abandoned girls’ school in the South is suddenly set upon by an injured Union soldier, this film might be Coppola’s most “what-could’ve-been” effort thus far.  After all, aside from occasionally questionable lighting decisions, the film looks good — both the sets and the costuming are well done — and the actors here (e.g. Nicole Kidman, Colin Farrell, Elle Fanning, Kirsten Dunst, etc.) are very capable.  But there’s just something off in the tone and the energy of the film.  For much of its runtime, everyone performs as if they’re heavily sedated and that, paired with the lighting and coloring of the film, makes for an oppressively muted (and too-often boring) result.  The film also ran into problems with some criticizing Coppola’s decision to omit an African-American character from the source-material.  Still…because of the people involved and the technical proficiency, I think The Beguiled had the potential to be a much better film, but it can’t survive under the weight of its own lethargy.

#4: Marie Antoinette (2006) – While The Beguiled strikes me as a film with potentially deeper meaningfulness that is largely unfulfilled, Marie Antoinette is, at its core, incredibly shallow.  In fact, this otherwise empty ordeal is elevated by its visual flair and its utter embrace of color, light, and ornateness.  [I suppose there’s something here, maybe, about the mundanity behind the scenes of a historically significant event — i.e. the French Revolution — but I also feel like I’m doing the work there rather than the film doing the work.]  It’s the filmic equivalent of fondant cake — beautiful to look at but you can have my slice.  I watched Marie Antoinette right in the middle of this retrospective, and this is the point where I noticed one of the (seeming) overarching central concerns of Coppola’s work:  rich people.  Am I suggesting that rich people are uninteresting subjects for films?  Perhaps.  Mostly, I just don’t need to be reminded of their (access to) decadence, and this is a film all about decadence.  [Even the summer cottage is out of a catalogue.]  But…as stated earlier, it really is a great looking film, and, because of that, it’s probably one that you should watch at least once, if just to gawk at the pretty dresses and sweets and whatnot.

#3: The Virgin Suicides (1999) – Coppola’s first film is based on the first novel by writer Jeffrey Eugenides, who would later receive much more acclaim for his second novel (Middlesex), which won the Pulitzer Prize.  Apparently, Coppola’s film — which recounts the last year leading up to the deaths of five sisters from a seemingly “normal” middle-class family in 1970s Michigan — is very faithful to Eugenides’s source-material.  In many ways, this feels like a first film; it’s imagistic and poetic, meandering and speculative.  Perhaps it’s the ghostly voiceover or the strange eccentricities of some of the performances (particularly from James Woods and Kathleen Turner, both of whom get a lot of mileage out of relatively little screen-time), but there’s something peculiar and alluringly odd about The Virgin Suicides.  Of course, I think we’re meant to question everything here — not just the primary characters’ (i.e. the sisters) motivations but also the interpretation of their actions by the neighborhood boys and the somewhat complicit non-action of the neighborhood at-large.  Like a lot of Coppola’s films, there something dreadfully mundane at work, which is sort of the point.  One of the only films in her oeuvre that explores middle-class malaise rather than the “difficulties” of the upper-class.  A very good first film that leans into its weirdness and rough-around-the-edges qualities and is all the better for doing so.

#2: Somewhere (2010) – To me, Somewhere is probably Coppola’s most underrated film — not necessarily critically (after all, it did win the prestigious Golden Lion at the Venice Film Festival) but with casual viewers.  And I can’t really blame people that turn this film off after its excruciatingly slow start.  The film begins with all the energy of a chair:  No ones speaks for the first 10-15 minutes, and it somehow manages to take high-performance luxury cars and tandem (twin) strippers pole-dancing in a hotel and make them uneventful.  But if you can persevere for the first 20 minutes of Somewhere, you’re rewarded with a movie that’s all about boredom and listlessness and how someone tries to (re)discover meaning in a familial relationship rather than objects.  The film is anchored by very strong, subtle performances from Stephen Dorff and Elle Fanning.  [Even Chris Pontius of Jackass fame is surprisingly good here in his supporting role, as his interactions with Fanning are some of the most human and funniest moments of the entire film.]  In fact, Somewhere was the point in the retrospective where I started to notice and appreciate how Coppola pretty consistently elicits great — often “best-of-career” — performances from her male actors, whether it’s Dorff or Bill Murray or even James Woods.  In some ways, Somewhere feels a little like Lost in Translation: Part 2 in its older-man / young-woman relationship that serves as the core of the story, though the nature of that relationship is different here (and, at times, it even works a bit better in this latter work).  The result is a flawed but still very good movie with a lot of heart.

#1: Lost in Translation (2003) – It probably comes as no surprise that Coppola’s most famous and most watched film, Lost in Translation, is also her best one to date.  Impeccably well-made and visually striking, there are several shots or framings that are almost painting-like in their ability to capture a kind of stillness — the opening shot being a famous example of this — which is all the more impressive considering the busy and bustling Tokyo in which the film takes place.  The film’s strength, however, is in its cast, namely the principle performers:  Bill Murray and Scarlett Johansson as Bob and Charlotte, respectively.  While this wasn’t Murray’s first foray into something slightly more dramatic, it was largely responsible for demonstrating the actor capable of more complicated roles.  [In fact, Murray received a Best Actor nomination for this performance; and while he didn’t win, I think that the benefit of hindsight has proven that he should have won for this role.]  Moreover, this film helped Johansson make the tricky transition from child/teenage actress into more adult roles, which is a move that a lot of actors struggle with.  Watching the film again (and I have seen it many times at this point), I will say that there are a couple of things that keep Lost in Translation from reaching its full potential — namely, the humor and the film’s treatment of its supporting characters.  Although there are several instances where the film’s humor works, there are several recurring jokes that fall flat — most notably the recurring “gag” about the Japanese characters being unable to pronounce certain words, which feels sorta icky today.  Furthermore, the non-Bob and non-Charlotte supporting characters (e.g. the lounge singer, the husband, the famous actress, the stay-at-home wife, etc.) are all treated with a sort of disdain, dismissal, and meanness.  [In that way, while this is the better film overall, I appreciated the tone and treatment of the characters more in Somewhere, which felt…I don’t know…kinder?]  And still, despite these issues, Lost in Translation remains one of the go-to “hipster” movies of the early 2000s and is one that you should certainly watch sometime, assuming you haven’t already.

Personally, I wouldn’t classify any of Sofia Coppola’s films as “classics” per se — i.e. that category of film that I’d argue should be preserved and viewed for as long as people are around.  I think she’s made 1 great but not-quite-classic film (Lost in Translation), 2 very good films (Somewhere & The Virgin Suicides), 2 mediocre films (Marie Antoinette & The Beguiled), and 1 bad film (The Bling Ring).  That’s a pretty even distribution in terms of quality, which is nothing to scoff at.  Furthermore, Coppola’s clearly a talented filmmaker in terms of her eye, and she still has lots of time and will have many opportunities in her career to make even more movies, if she wants.  Obviously, growing up in her particular family, Coppola had quite a bit of privilege and security.  It’s probably a stretch to suggest that this may have influenced the privilege and security (and the interest in the depression that can result from that) within her art, but I guess that is what I’m suggesting as a possibility.  [With few exceptions, much of Coppola’s work is relatively narrow in terms of class and extremely narrow in terms of race.]  I’d be intrigued to see her explore some more diverse subject-matter and perspectives — perhaps even a genre film? — and see how that affects her filmmaking.  I’m optimistic, ultimately, that Coppola has more good movies in her, and I’m curious to see which directions she might move toward.